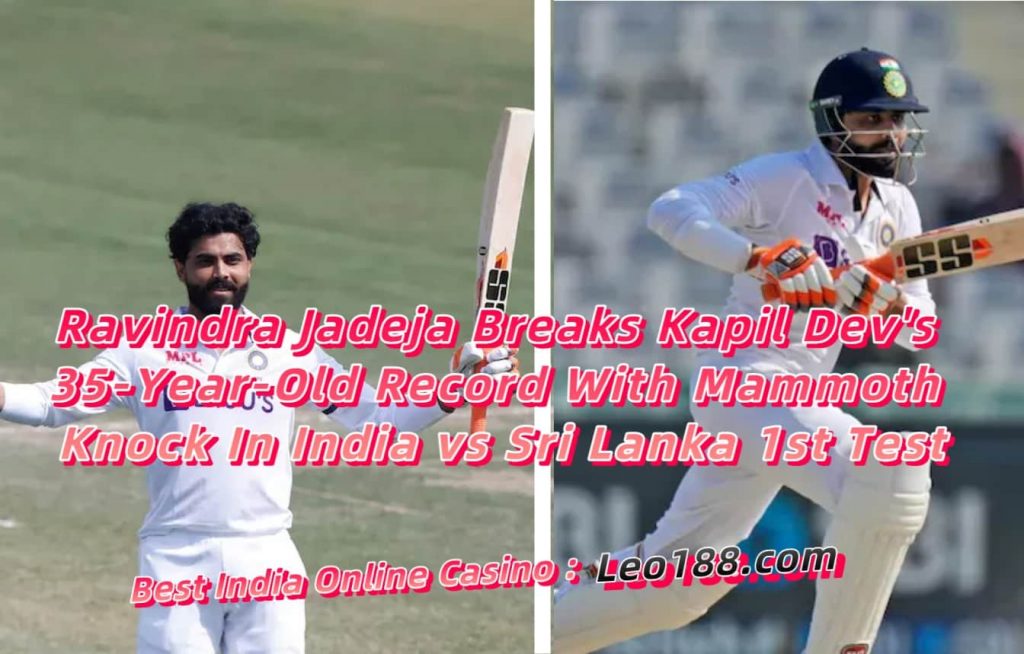 India vs Sri Lanka: Ravindra Jadeja on Saturday broke Kapil Devs long-standing record for the highest score by an Indian coming to bat at No.7 or below in Test cricket.

Ravindra Jadeja etched his name on the history books by slamming a career-best unbeaten knock of 175 on Day 2 of the first Test against Sri Lanka in Mohali. Jadeja on Saturday broke Kapil Dev’s long-standing record for the highest score by an Indian coming to bat at No.7 or below in Test cricket. Kapil held the record for 35 years. He had amassed 163 against Sri Lanka in Kanpur way back in December, 1986 while batting at No.7. Jadeja went past that score on Saturday in an innings that was stamped with class and authority.

Jadeja also became only the third Indian to register a score in excess of 150 while batting at No.7 or below in Test cricket. Apart from Jadeja and Kapil, Rishabh Pant is the other to play a 150-plus knock batting at that number. The India wicketkeeper-batter had scored an unbeaten 159 against Australia in Sydney in 2019.

For the record, the great MS Dhoni’s highest Test score while batting at No.7 is 144. He had achieved that against South Africa in 2011.

Coming back to Jadeja’s knock, the left-hander registered three century stands – first with Pant, then with Ashwin and finally with Mohammed Shami to take India to a mammoth first innings total of 574 for 8.

Jadeja was unbeaten on 175 and Shami was batting on 20 when captain Rohit Sharma decided to declare the Indian innings.

Jadeja hit three sixes and as many as 17 fours in his flawless innings in which he scored at a brilliant strike rate of 76.75.

He was happy to play second fiddle on Day 1 when Pant at the other end was going ballistic. On Day 2, resuming at 45, he once again took his time to build another solid stand with Ashwin (61). But once he reached three figures, there was no stopping Jadeja.

The attacking left-hander ended up scoring more than 80% of the runs in the 103-run partnership between him and Shami.